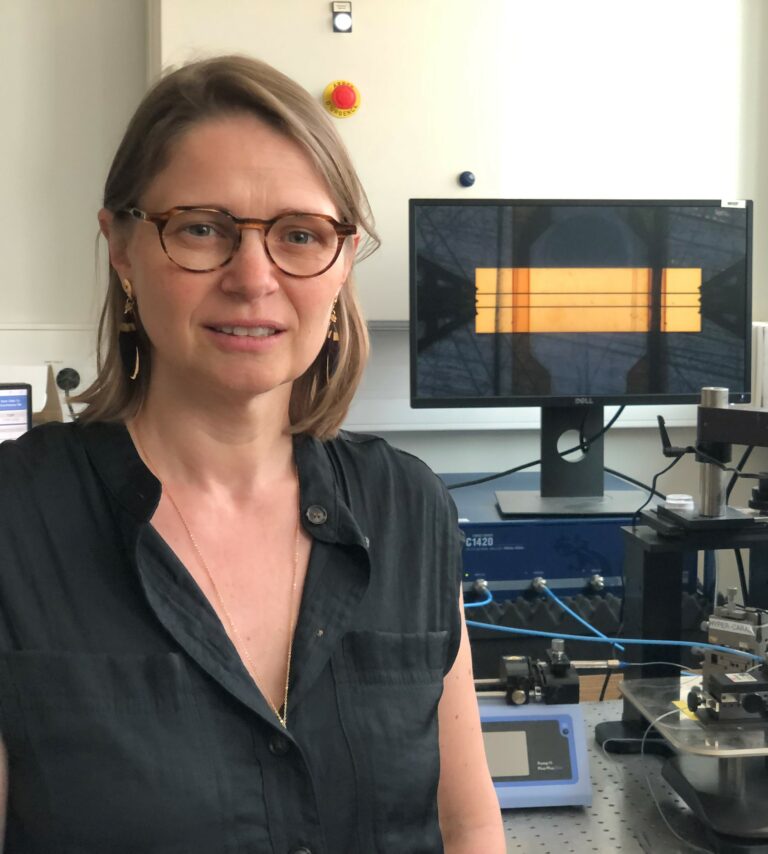 Katia Grenier received her Ph.D. degree in electrical engineering from the University of Toulouse, France, in 2000. After a Postdoctoral Fellowship at Agere Systems (Bell Labs, USA) in 2001, she joined the LAAS-CNRS in France and was engaged in RF MEMS circuits on silicon. From 2007 to 2009, she was with the Laboratory for Integrated Micromechatronic Systems of CNRS (LIMMS-CNRS) in the University of Tokyo, Japan, where she was engaged in launching research activities on miniature microwave-based biosensors. Since 2009, she is heading a research group at LAAS-CNRS with interests are focusing on the interaction of RF electromagnetic waves with complex fluids. It involves the development of microwave-based systems based on dielectric spectroscopy for biological and medical sensing applications as well as for evaluating electromagnetic waves effects on the living.

Dr. Grenier is a member of the Technical Committee dedicated to Biological Effects and Medical Applications of the IEEE Microwave Theory and Techniques Society and of the European Microwave Association. She serves as Program Committee member of several conferences, including the IEEE MTT-S International Microwave Symposium and the European Microwave Week. She also chaired the IEEE BioWireleSS 2015 & 2016 conferences, was the General Chair of the IEEE International Microwave Biomedical Conference 2020. She has acted as Guest Editor in several Special Issues in IEEE Transactions on Microwave Theory and Techniques (IEEE T-MTT) and IEEE Journal of Electromagnetics, RF and Microwaves in Medicine and Biology (IEEE J-ERM). She is also regularly involved in Women in Microwave events' organization. She has authored and co-authored over 220 technical conference, letter, journal papers and book chapters, holds 4 patents and is involved in the spreading of microwave techniques within industrial products.

Microwaving Cells for Molecular, Cellular and Tissue Sensing: Which Status, Challenges and Prospects for Health and Medicine

Microwaves and millimeterwaves constitute a current and quasi ubiquitous element of our surrounding and living environment. They are not only used for rapid food heating but also widely known and increasingly exploited for wireless communications, automotive radars, home automation and now with the explosion of data transfer from connected objects. In addition, microwave and millimeterwave dielectric spectroscopy is a powerful technique to non-destructively and non-invasively sense materials. This method exploits the interaction of the electromagnetic field with matter and probes the dynamics of molecule reorientation, predominantly water molecules with its relaxation phenomenon centered around 20 GHz for bulk water, and the variations between the bulk and bounded contributions. Investigations such as macroscale moisture content measurements in agronomy, water detection in soils have been successfully carried out and exploited in industry. Dealing with biological research and biomedical applications, where non-invasive, label-free and contact-less abilities as well as in-liquid measurements constitute important leitmotivs, investigations have been conducted for long with a strong emphasis on microwave imaging for cancer detection, as well as treatments and ablations with localized heated probes. With the advent of microtechnologies and the miniaturization of microwave sensors in association to microfluidic implementations, the non-destructive and label-free analysis of molecules, cells and tissues by microwave dielectric spectroscopy has become possible. The talk will therefore provide a status on the developed sensors and the associated instrumentation, as well as on the reached sensing capabilities demonstrated on different biological and living materials and at different scales, from the molecular, cellular to the tissue level and more recently with the microtissues. It will more particularly highlight the major challenges that needed to be addressed and the remaining ones to face. Based on the illustration of the main achievements, prospects will be given towards a better biological understanding, the early diagnostic of diseases and their treatment, and towards personalized medicine.